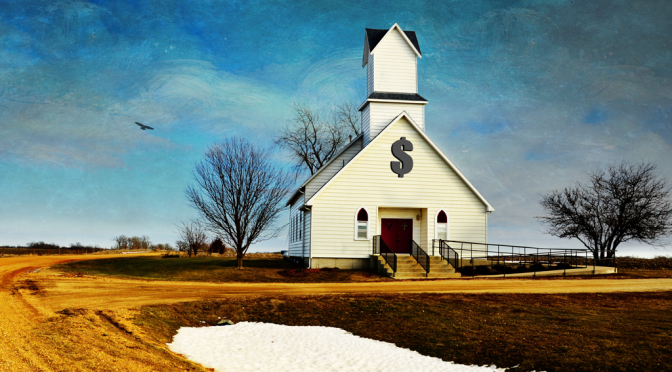 After binge-watching the first season of the TV show “The Last Kingdom” yesterday on Netflix, I was really annoyed and upset by all these constant references to God and Christianity,...

After binge-watching the first season of the TV show “The Last Kingdom” yesterday on Netflix, I was really annoyed and upset by all these constant references to God and Christianity, and as an anti-theist myself (atheist is not strong enough), I couldn’t help but feel close to Ragnar Ragnarson in his fight for justice. But what struck me even more is how much Christianity back then has in common with something today: Finance.

Finance has become the new Chrsitianity of the land. Currency has become the new Prayer. Economy is the new Faith. In Christianity, you have to suffer in life to be happy ever after in Heaven. In Finance, you have to work like a slave all your life to live happily ever after in retirement. Christianity had its priests and clergy, Finance has its traders and bankers and quotation agencies. In Christianity, you could either be a good Christian believer, or a godless barbarian. In Finance, either you are a docile taxpayer, or a jobless slacker. And if you push boundaries a bit further, when you dare to point out the flaws and the corruption of Finance, you are called a Conspiration Theorist, pretty much with the same status as blaspheming heretics back then. Dare to try something different, propose an alternative currency, universal income or negative interest rates and you are pretty much a witch, in direct contact with the Devil. Talking about the Devil, the closest thing to Finance’s equivalent of Hell would probably be… Socialism? Or Misery? Or Bankruptcy? Or homelessness? The concept of Salvation has been replaced by the concept of Growth, this thing that every politicial would like to influence, but nobody really knows how. Sometimes they sacrifice some jobs or human rights to the Markets, those angels of the Profit god, hoping it will please the Markets and bring some Growth. But everybody is drinking every word from the quotation agencies, those direct conduits to God. And then of course, nobody dares to discuss the fact that the clergy has to take its toll on all that: what used to be called tithes are now called interests, and everybody finds it perfectly normal to pay those interests when they borrow money that doesn’t even exist in the first place, they would almost be afraid not to pay them. Same for the taxes people pay to their Nation-State, that are used in turn and in good part to pay back interests to the banks as well. The Church itself didn’t have to pay taxes by the way, pretty much like the Markets and their actors. The main problem is that our governments, our Nation-States are way too entangled with the Clergy of the Finance Church, they are not independent anymore, and it will take years and tremendous courage to separate both, to separate the Finance from Government in the same way as we separated the Church from the State. Maybe we can take some inspiration, remember how this separation was done, and continue the metaphor to do the same for Finance.

The way I see it, Finance has corrupted and rotten the very foundations of our societies. And I’m afraid that every attempt to separate the parasite, will also bring the whole house down. Unless we do something to build other foundations in parallel and when they are ready, we destroy the old ones. I would start with currency: with crypto-currencies, we don’t need the bank anymore, either to create currency or to monitor it. We can get rid of the middle man and let the network handle the security and rule-enforcement. Bitcoin is just one example of such a currency, not necessarily the best one because of the rules it was designed to enforce: deflation, parity with fiat currency, etc. But it opened the discussion and a whole new horizon of possibilities. Without middle-men in our currency exchanges, no more need to “pray for something to happen”.

I would continue with democracy. Once we have a suitable crypto-currency, based on a proper blockchain (a transparent, verified and universal ledger of all transactions), we can also dis-intermediate every single contract our democracy is based upon, including the most fundamental one: the voting contract. And I’m not talking about corruptible electronic voting machines here. I’m talking about the ability for every citizen of the City to take part in the public debate and give their vote on issues that matter to them on a daily basis, along with the capability to inform them accordingly of course. I’m talking about switching from Representative to Participative democracy. And I know some people will call me a utopist on this one (yet another word to discard heretics), but just make an effort to wonder how many of your beliefs that led you to this conclusion were actually taught to you by the Finance clergy. “People are not educated enough, if people had been asked about the death penaly in France, they would have voted to maintain it”. Etc.

Another important pillar for me is the very notion of work. Work in Finance is like Penance in Christianity. Society’s Growth is the direct product of your individual work, like mankind’s Salvation was the result of everybody’s penance. It seems obvious and non-questionable because we are being taught that from our very early age (and because it echoes some of the same theories from the Church as well). But with the massive movements towards workforce automation these days (Uberization and the likes), the absurdity of this logic becomes apparent. We are even creating some artificial penance, forcing people to work silly jobs that could easily be automated, for the sake of maintaining that illusion. Work, like Penance back then, is becoming a goal in and of itself. We are forgetting the real goal behind Growth: self-fullfillment, happiness, freedom. For decades we have been told that the only way towards that goal went through Work, Taxes and Financial Growth. But what if there’s another way, a faster way, a cleaner way? Do you think the traders who are paid more in a year than what you are paid in a lifetime will wait until retirement to find their Salvation? I think we need to change our vision about work, from something we must do to make a living, to an activity we enjoy doing because it brings us plenty of different rewards directly, including happiness, self-fullfillment and freedom. Because it brings value to the society as a whole today, not because it will bring Salvation later. Of course some of this value will be paid back to us in currency, and of course, the more value we create for society, the more benefits we should get (currency or otherwise). But work should not be a life-or-death necessity anymore. That’s why I’m convinced Basic Income is THE solution. And when you hear the Clergy of Finance say things about basic income like Socialism, and conspiration theory, and utopia, remember about Hell, heretics and witchcraft.

Probably the last pillar, the hardest one to change, and the longest change to show its effects, is education. Our entire school system was designed for another time, a time of centralization, of pyramid structures. A time when school needed to train good employees, docile citizens, not independent entrepreneurs who have to figure out their mission in this world, and have the power to decide what they want to achieve. I strongly believe that this is the world that is emerging before our eyes. And it is time that we take it into account and rebuild our education system from the ground up accordingly. Our kids need skills more than knowledge. They need initiative more than authority, they need creativity more than learning by heart. Not just because of the internet and all that it gives them access to. But because of the way it is changing our societies, because of all the new paradigms it’s going to create in the future, whereas we are still preparing them for yesterday’s only paradigm. Our children need to be able to use their full potential, not just the normal one, to be able to see patterns and explore all the opportunities and dangers of what’s to come, because there will be both. And nothing in our current education system prepares them for that, neither in content, nor in form. I think we need to explore ideas like flipped classrooms and Montessori. Those are just two possible evolutions I’ve heard of and I’m clearly no education expert, but I think it’s time for us to reinvent our system, and maybe get out of the dogma of one single school system. Because kids are diverse, they are individuals, each with their own strengths and weaknesses, and they all live in different contexts, with different realities and concerns, and of course we need to spend as much energy understanding those contexts and adapting our schools to those contexts, as actually coaching our kids in those schools.

With the right currency, democracy, workforce and a generation prepared to take full advantage of all this, I don’t see how we couldn’t take things to the next level.

Once we have those four pillars, we can actually start to build a new house on top, a global house. Because in the same way that the Church understood that it had to transcend borders back in the day, Finance is already transnational, unlike our democracies. And for me, that’s one of the reasons why we are powerless and divided. I don’t believe in borders, I don’t recognize the right of national governments to tell me where I’m allowed to live or not, depending on where I was born. I don’t see why I should suffer from the consequences of decisions of other countries simply because I have no say in choices that their governments make, although they have an impact on all of us. And more importantly, I believe I’m not alone to believe that. I think the new generations see themselves more and more as citizens of the world. I’m not French, I’m not Belgian, I’m not even European, I’m an Earthian. Yes, we have different languages, different cultures, different lives and different day-to-day concerns, but we all share the same planet, the same resources, the same science. So we should have a global platform for governance. Note that I didn’t use the expression “global government”, because it sounds too much like what we have today, only bigger, thus with even more corruption and control. What I think is that the transition I described earlier will happen locally, in various countries, playing by the rules of the old system, and then those transitioning countries will work together, create alliances, merge their platforms into one until it covers the whole planet. Will there still be a place for Finance in this world? Sure. Like there is still a place for Christianity in some places in today’s world. Some people will keep having faith in Profit, they will live by its rules, act on its precepts, but it won’t affect all of us. Because it should not.

Original Photo by keeva999 (with a cross instead of the dollar sign) – http://flic.kr/p/dQKNXH

One thought on “The Last Kingdom”